Climb to the Rooftop of Africa

Machame Route Is second established route to Climb Mt Kilimanjaro after Marangu route. This route was nicknamed as Wiskey Route of which many people don’t know why ……. but was named as Wiskey route since was the first camping route established to hike Mount Kilimanjaro. Due to its varied and beautiful nature this route become so popular, unbeaten one and with amazing splendor. The success of the route is high to 98% with Bush Windows Tours and Safari. The route start with a short drive from Moshi town to Machame gate before the hike starts. The route begins from the south heads to west and then later traverse to underneath Kilimanjaro’s southern ice filed before summiting from south east of the mountain. The population on this route has been reduced after the coming of Lemosho route which is considered as new route. These two routes meet up in day three and continue as one until the end of the tour.

You will be picked up at the Kilimanjaro International Airport and transferred to your arranged hotel in Moshi town. You will meet your guide who will brief you on your upcoming trek and do an equipment check to make sure you have all the necessary mountain gear. Gear which is missing can be rented on this day.

The drive start from Moshi to Machame gate by passing through the Machame village which is located on the slope of mountain Kilimanjaro. After gate formalities and permits we start the hiking to the sense rain forest until we reach to Machame camp

Our route continues on up through the forest until we reach the steep ascent onto the Shira Plateau, where there are rewarding views of the mountain. Looking back, you will be able to see Mt Meru rising high above Arusha town in the distance.

Walking now on high moorland, the landscape changes the entire character of the trek. We traverse the southwest side of Kilimanjaro, passing underneath the Lava Tower and the final section of the Western Breach and finally reach camp The day has been spent at altitude (up to 4600m), but we have followed the mountaineering code of ‘walk high, sleep low’ to aid your body’s acclimatization to altitude.

Our day starts by descending into the start of the Great Barranco, a huge ravine. We then exit steeply, up the Great Barranco Wall, which divides us from the southeastern slopes of Kibo. It’s a climb over rock, not technical but long and tiring. Passing underneath the Heim and Kersten glaciers, we head towards the Karanga valley. From here we have a steep climb up from Karanga valley to our night’s camp at Karanga camp, set at 3963m. For those feeling strong we will go for a mid- afternoon acclimatization trek up to around 4200m before descending back to camp for the night.

After a good night’s rest and breakfast, we set off on our walk to Barafu camp at 4640m. The climb will take us across desolate scree slopes with no vegetation around us at all. It’s a tough steep walk made more difficult by the altitude. On arriving at camps, we eat and spend the afternoon resting as we prepare for a long night and day ahead. It is important to keep hydrated and warm. We have an early dinner and then try to get some sleep as we will be getting up at between 11pm and 12pm to start the climb to the summit.

sasWe start off at around midnight and walk steeply upwards to the summit glaciers. We will be climbing scree for 4 to 5 hours but gain incredible height over a short distance. The views are spectacular. We should be on the crater rim at Stella Point (5739m) as the first rays of the sun hit us. Spectacular ice cliffs within the crater surround us and the views to jagged Mawenzi peak and beyond are breathtaking. Another hour’s walking takes us to the summit, Uhuru Peak (5895m). We begin our descent by returning to Stella Point and then descending on scree slope and track back to Barafu Camp for breakfast, before finally heading down to Mweka Camp for a long well-earned rest.

we complete park formalities and receive certificates, which you can hang up with pride! We are then met by our vehicles and return to the hotel in Moshi, where you can treat yourself to a welcome shower then celebrate with cold drinks. Overnight at your arranged Hotel

This day left for your next destination. If you have safari, then might be used to beginning your safari or fly to Zanzibar or fly back home. Our vehicle will be ready to take you to the airport at your time. 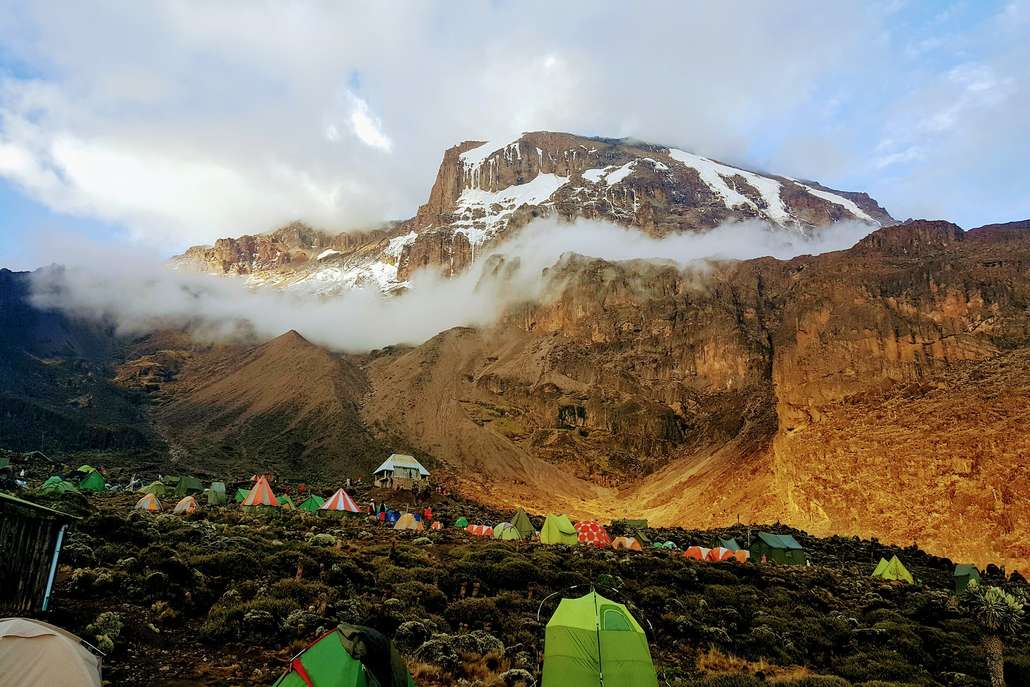